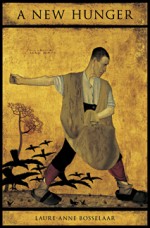 What struck me about this latest collection of Laure-Anne Bosselaar's was her inside-out way of observing the world and how it sustained —or should I say fed? — these poems in both language and form. As a fan of her The Hour between Wolf and Dog (1997) and Small Gods of Grief (2001), I was eager to get my hands on A New Hunger (2007), and when I opened it, I felt like I was back with an old friend. The assured voice of these poems is not crafted but evolves naturally out of crafted poems. This is evident in lines that close the poem "Against Again" — a poem of a typical encounter on a train but which took the antennae of Bosselaar to catch it and present it to the rest of us.

A transitory nearness,
a transit story.

And always this hunger,
an exhausted longing —

the wait and the weight.

One day, while crossing Park Avenue in New York City, I smelled the freshly mowed lawn of the divider and was instantly transported forty years back in time to my grandparents' home and the scent of their grass being cut. They say that the sense of smell is our most immediate connection to the past, but in Bosselaar's poems there are a variety of images that return us in time or move us to another place. From the first poem, Against Again, and throughout the book, Bosselaar starts from an outside image that connects directly back to an earlier time or is transformed into an inner dialogue. In the second stanza of the poem, this happens while we barely notice that we are not on a typical train ride.

bare, hard features, framed and drafted by birth
toward this commute — since when and to where? —

each face naked with braveness.

Even this small child, harnessed into a dirty stroller:
all she can see are legs. For her,

this train is packed with pants, belts, zippers, and shoes —

and look at her face: already courageous, defeated,
and old with it.

In the third stanza, the reader is transported to the poet's childhood and the face of her mother. The elegant way the second stanza finishes and the third opens in another setting is masterfully done. It is both unsettling and comforting how often this inside-out way of looking at the world appears in the book — unsettling, in that the surface topics, in this case, a small child leads to something outside of the train, so the reader never really knows what direction the poet will travel; comforting in that each poem identifies with the person or thing being observed. Here the reader identifies with the child as we see the world through her eyes. Even though the collection is called A New Hunger, readers will find they are nourished by the empathy shown to those being observed.

If anything, Bosselaar is the ultimate people watcher. From the opening to the close of the book, poems like "Bus Stop," "Counted," "Man at the Museum of Modern Art," "It Had to Be You," "Awe," and "Night" are all about people seen from a distance who strike an interior chord. In "Man at the Museum," the poet questions herself:

...Why do I follow him? What
makes me do that, so often, in streets or

subways even, getting off before my stop
to follow a man, woman, couple?

Throughout the book, the poet is listing and counting, and in "Counted" she observes a child:

In the park— while her mother
and another woman hold each other and kiss
a three year-old counts pencils in a box:

She has already lived long enough for shadows to pencil her in, already

knows hunger and the long

ache to be held

while all along the insatiable Counter
has held her: each one of her frowns,
each breath

while all along spring
is pastelling everything —

In this poem, counting has become the child's way of feeding that hunger. In the following poem "Swallowing" the child learns ways to "swallow better" by counting tiles in the bathroom. The repetition in many poems are used for comfort as in counting pencils but are disturbing because repetition usually gives lines stronger beats, as in the first lines of "Swallowing":

And the mother: Swallow that.

The child does. Good child, obedient one.

"Swallowing" also employs lists like "sirens, bells and phones ringing" and "voices begging don't leave me again, don't go" with the effect being similar to counting and repetition. Throughout A New Hunger there are lists, identifying pieces of the whole, but the very nature of listing becomes unsettling if viewed as a lifeline.

A New Hunger is divided into three sections, the poem "Against Again," followed by "The River's Mouth, The Boat, The Undertow," a corona of sonnets that comprises the second section, and the final group of poems, called A New Hunger. In "Against Again," the lines

appear on the fifth page. To have the book open up with this image of the convent and children with "ravenous eyes" is heart-wrenching. At the end of the book, the poet confesses to "Friends":

this is the viscous heart I hide from you:
gnashing, polluted and hooked to my ribs
like a burr, stuck there and stinging,
and it is only 4:14 in the morning.

It is slightly hard to believe that a heart like this could beat in a speaker who offers such thanks at the end of the poem where she is tapping her fingers on the window sill counting the syllabic beats of her friends' names. "Friends" is followed by "Night," where the poet offers a prayer for the hurting city to sleep until the waking, which will be the windowless night in which we live. There is an amazing mix of sin and sainthood in these poems that the poet identifies with, the people that wound and those that have been hurt.

One of the exciting elements of this book is the corona of sonnets in the second section; Bosselaar literally turns the form inside out. The corona follows the traditional format, in that the last line of the sonnet begins the next sonnet and the final line of the last sonnet begins the first. The sonnets consist of 14 lines, but this corona is 13 sonnets long. There is also a second line repetition between the seventh and eighth lines of each sonnet. Finally, there is a rhyme scheme, but it is mostly internal and includes more slant rhymes than the traditional end-line patterns.

This example of the internal line repetition is from the first sonnet, where the seventh line is repeated in the eighth with a slight variation. That variation, though — the change of gone to lost — introduces a sound change in the next stanza. Where the previous stanza had a lot of "gone" sounds — with the "g" and "o" sounds in job, dog, love, bending — the next stanza changes to many "s" sounds of lost that appear in words like swiftly, hushed, resiliently, adjust.

Idog, lover or job — as you move on, just one of many
bending over another job, dog, love. But the balloon:
how suddenly it was gone

How suddenly it was lost. How swiftly hushed
the crying child. How resiliently we adjust
to black dots in the sky: only dust.

This internal line repetition not only changes the word sounds but also can signal a change to a memory. In the second stanza, the poet sees someone who reminds her of the death of her lover, who was found frozen after a skiing accident.

The heart refusing one more stab of it.

His heart refusing one more stab, had stopped. He was found
leaning against a tree, frozen.

This stanza ends with the line

the wind-whistle of birds taking flight.

The next sonnet begins with

Ah, those wing-whistles of birds taking flight! No painter
could evoke such a sound. No music describe his mother's
glance, at once rising sun and Crow Moon.

and the poet is off in a completely new direction. These movements within the sonnet and between the sonnets are barely discernible, as the voice is so pleasing and conversational. The poet's language is full of slant rhymes; in the fourth sonnet, for example, words rhyme in both English and French within the sonnet — la bas/ pas, seventeen/ cleaned — and at the end of lines: nuages/ Brussels, pas/ love, please/ army, uniform/ frozen. The series glides through with beautiful language, like these final stanzas in the eleventh sonnet:

He stole it from the sand: a small shell, dull
as the world around him. In the dank stealth of his room
he opened it: the shape of a heart now, it held

Hthe taste of salt on skin, the colors of sails, peach
blossoms in spring. What it no longer held was a void
familiar to him. But what had remained was wonder:
an emptiness beginning to stir.

The title of the series is The River's Mouth, The Boat, The Undertow and the phrase appears in the final sonnet of the corona. It is the point from which Bosselaar sees the world.

You and I in the stoop's cracks where the weeds grow. Inside
night's cravings, and beyond them. In our house—
key's clatter, the porch-light's glow. And on bills:
our names, together, behind those lucid windows.

Bosselaar's poems come from this lowly and typically overlooked angle; seeing the world from this vantage point results in fresh and addictive poems. For the reader, this book will be a new hunger, too.