A Dream Deferred: Activism and the Arts
by Gary Corseri 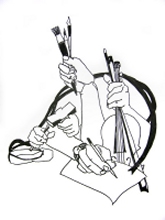 What happens to a dream deferred?

Does it dry up
like a raisin in the sun?
Or fester like a sore
And then run?

Or does it explode?

Langston Hughes was 49 when he published that poem, back in the True-Man era. He'd seen some ups, and he'd seen a lot of downs, born soon after the War to End All Wars, growing up "Negro" in the crime-roaring twenties, and the soul-deep Depression. He'd seen the Labor Movement crushed by hired corporate guns and goons, and government of the mighty by the mighty saved by the "traitor to his class"—who was no traitor to his class! ... He'd seen another War to End All Wars and the holocausts of Hiroshima, Nagasaki and Dachau, and the beginning of a "Cold War"—that was no Cold War!

And he'd seen a people put their dreams on hold. A "Negro" people, an American people; and the poor and powerless and disenfranchised all over the world—war-weary, war-devastated, hard-laboring, peace-craving, hungry, disenchanted, confused by the cascading changes, searching, questioning, truth-seeking light in their leaders—and holding fast to their dreams: the old dreams of peace, equality of opportunity—and equality before the law; fairness—a New Deal, a Fair Deal; the dream of the promise of technology to eradicate poverty, to expand human horizons to the zenith of our best understanding; the dream of social progress in our families, our communities—and in our shared humanity.

"What happens to a dream deferred? Does it dry up like a raisin in the sun? Or fester like a sore—and then run?"

We are nearly three generations removed from the publication of Hughes' poem. We've had some ups—and a lot more downs. We've seen the best minds of our generation destroyed by madness, as Allen Ginsberg put it. The madness of materialism—owning things, possessing things, caressing things in a world of shrinking resources, "peak oil," water shortages, food riots. We've seen the promise of technology pollute our rivers, our lakes, even the fathomless seas, and the air we and our children breathe. We've been confused by the cascading changes, future-shocked by the rate of change—the unbearable lightness of our being—and we wonder where to stand, and how to hold on to this fiercely spinning globe.

"Does it stink like rotten meat? Or crust and sugar over like a syrupy sweet. Maybe it just sags like a heavy load ... Or does it explode?"

We gather here—and in towns and villages, suburbs and cities all over this land—to ponder Hughes' mighty question—to share the burden of our dreams, to challenge our dreams: have they been beacons, or have they misled us? This American Dream that Henry Miller back in 1945 called "an air-conditioned nightmare"—where is it taking our world—this shrinking, wounded globe we share with hungry billions—what healing vision can we offer? We who traveled first into the future—where did we stumble, where did we lose our way? And can we help each other now? Can we put aside the territoriality of ideas, the preciousness of ideology and find the thread out of the maze?

These are mythic times—and we have been like the explorer Jason, wandering through the labyrinth, lost in a hall of mirrors in which we have had to confront ourselves, our worst fears, and, ultimately, the child-devouring demon, that half-beast, half-man Minotaur-monster that looks a little bit—bears an uncanny resemblance to—Dick Cheney! But is really much more than Dick Cheney—is really, the consummation of our dreams distorted—dreams of comfort and ease and endless expansion on other people's lands, using other people's resources. And now, even as we confront the Beast, we ponder the way back. And we remember that the root of the word revolution is volvere, to turn, with the prefix re—back. And so we wonder how to get back to first, best principles—the best thoughts of our spiritual leaders: "Love thy neighbor as thyself"; "Do unto others as you would have them do unto you" ... ; "Follow the golden mean." And we hold in our hands the secret of the way back: not a rope, not a cord, or spool of thread as the mythological Jason, but a chain—every single link forged with understanding, courage, creativity and action.

Let us then learn from one another, for we have been Argonauts—travelers on a voyage of discovery, trying to determine our place amidst the light and the shadows. "Whence come we? What are we? Whither are we going?" Gauguin titled one of his paintings. Let us then listen and inspire.

We have many sharp analysts on the Left — acute minds trained in dialectic; wonderful writers and thinkers who can present well-honed arguments; people armed with information, facts and figures; and we have humanists who see the bigger picture—We know how corporatism and militarism impact communities, and we can buttress the story with solid information to ameliorate and avoid the crises, to work towards building a new world. But, sometimes, we lose sight of the importance of the artist in conveying the message to the people most affected by these seismic changes; conveying that message in an emotional and unforgettable way—combining the best of what we think and what we feel.

"Poets," Shelley told us, "are the unacknowledged legislators of the world." And he meant "poets" in the biggest sense—those who dare to dream: wordsmiths and painters, musicians and dancers, playwrights—and the man or woman working in wood, in clay, fashioning mind-heart rhythms into palpable essences, memorable, life-altering events: departures from the quotidian that make returning to our former states uncomfortable or impossible. "You must alter your life," Rilke tells us at the end of his "Apollo Belvedere" poem. Creation is a constant challenging.

But we have been living through an Age of Brass. The great ferment of the 50's, 60's and early 70's has tasted like sour wine poured from old bottles, as our artists sat back and financialized their talents. The formulaic, the commercial established their domain over innovation, the politically and socially questioning and challenging. The Baby Boomers long ago boomed-out, and the generations that followed took the primrose path of co-optation, milked the golden calf long before the calf was ready, and the grantsmen came, and the university sinecures were offered to the complaisant and the facile and non-threatening.

For almost forty years we have wandered in this desert of non-art: art divorced from the life and concerns of "average" men and women. And because "artists" (artistes! Artists manque!) have turned their backs on the life and times of the people they should serve, they have, in turn, been shunned by the peanut-crunching crowd, the pop and popcorn consumers, the beer and bratwurst guzzlers, too tired to think, too numbed to feel.

But ... great changes start at the edges. The first amphibian crawls out of the sea; a seed is planted, a corner-stone laid. In the fullness of time, "Gilgamesh" is written. Even today, artists are sounding the depths at the margins, going beneath the "dead zones" to where the fastest fish escape to jangle our nerves. From Java Monkey Speaks in Atlanta to the Cornelia Street Café and Yippie Museum in Manhattan; from slams in Chicago to private homes in D.C.; from soirees in the tony Berkeley Hills to coffee shops in Seattle—the tribes are gathering, polishing the old tales, spinning new ones.

We refuse to be quiet any longer. We refuse to numb ourselves to corporate crime, the military-industrial complex, the pollution of mainstream media, the theft of our ballots, the dumbing-down, the bastardization of our arts and culture. We are gathering and telling our stories. We are listening and painting and shaping the wood and inserting the grace notes. Poets are collaborating with composers and musicians. We no longer buy the tripe of "art for art's sake." We do not wait for the professors to sanction what we do. Politics is too important to be left to politicians. Politics is about power relationships and we demand to be part of the equation. Here, we are aided by new technologies: We can burn our own CD's, we can publish our own books, market our wares on the web; and take down the Empire of greed and duplicity with every chalk drawing on the sidewalks of our cities.

We can explore new sounds, new ideas, new visions and new dreams together. We can explode some old myths, and lay the foundation for deeper truths—truths we have wrestled the angel to find: the chiseled truths of intellect, the perdurable truths of the heart.

** Welcoming remarks delivered, with some modifications, at the "Building a New World Conference" in Radford, Virginia, May 22-25 this year.

Gary Corseri has published novels and poetry collections, had his dramas produced on Atlanta-PBS and elsewhere. He has published/posted his work at hundreds of venues, including DissidentVoice and Thomas Paine's Corner. He served as Arts Coordinator and co-organizer of the "Building a New World Conference" in Radford, Virginia, May 22-25 this year. He can be contacted at gary_corseri@comcast.net.