Michelle Herman
and her brother Scott

I was three years and nine months old to the day when my little brother was born, on December 9, 1958.  I was furious—I remember that—and (they tell me) murderous, too....    Read Story 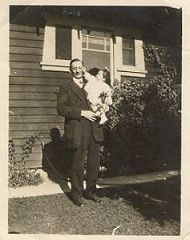 Often, in the late afternoon, Clarence Tilting’s mother, busying herself in the kitchen with preparations for that evening’s dinner, would glance out the open window and see Clarence and the young girl who lived next-door playing quietly on the Tilting’s neatly trimmed front lawn. There might be a gentle breeze stirring the edges of the curtains, blowing faintly in through the window, exchanging a distinctly outdoor fragrance for the odor of whatever was simmering on Mrs. Tilting’s stove...