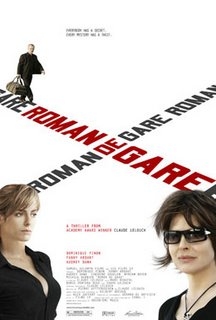 Having seen Roman de gare three times, I should be something of an expert on this movie, but I just can't wait to see it again. The only thing regrettable about additional viewings is that the countless surprises get diluted; but these are a function of the film's many levels, which remain a challenge and a delight even after you've learned what they are going to contain.

For this reviewer (to digress right away), it's a joy to see that one of my favorite directors (perhaps the favorite, with the passing of Ingmar Bergman, who had nothing in common with him except a strikingly distinctive voice), Claude Lelouch, now seventy, not only has made one of his strongest and most entertaining films but also seems to have achieved the success that long eluded him — for no good reason other than the much resented acclaim (hard won, incidentally, as his earliest work was disparaged as too accessible by the Cahiers du Cinéma crowd overseen by Lean-Luc Godard) that greeted Un homme et une femme ( "A Man and a Woman") in 1966. The new film is certainly at once his most challenging and most enjoyable feature since Le chat et la souris ( "Cat and Mouse"), from 1975. For Lelouch, incidentally, A Man and a Woman has always been something of an albatross; a box-office smash worldwide, it became the film its director was known for, no matter what else he made and even when what else he made was better. And for a popular film, A Man and a Woman, immediately charming as it is, has enough depth and universal appeal to hold up forty years later, much more so than any of Godard's contemporaneous output. But the director was prevailed upon to repeat himself with such fluff as Another Man, Another Chance (1977) and A Man and a Woman: 20 Years Later. In the hilarious opening sequence of his 1973 film La bonne année ( "Happy New Year"), a group of prisoners, captive audience supreme, are taken to the basement (where else?) to see a movie, and when it turns out to be (what else?) A Man and a Woman they riot, both in outrage at the movie being shown and to cover a prison breakout. In Roman de gare, if you're paying attention, as you must, you'll catch the reference — generic but unmistakable — to "a man and a woman" as someone tries to identify a missing couple. Incidentally, Lelouch made Roman de gare, which he wrote as well as directed, under a pseudonym, presenting the finished product at first as someone else's work, to avert any prejudicial response.

Driving much too fast on his way out of town, seedy-looking Pierre sings along to his car radio's Gilbert Bécaud (fast cars and pop songs are common in Lelouch movies; Bécaud himself appeared in the most serious and touching of Lelouch's films, the 1974 Toute une vie), interrupted by news that tells us a serial killer is on the loose who lures his victims with magic tricks. At a bus-cum-gas station (gare) on the open road where he stops to get coffee, Pierre charms a couple with the paper flowers he gives their daughter. Minutes later, he sees another couple arguing, before the man drives off. Pierre offers the woman, Huguette, a ride, which she reluctantly accepts. Later, in the middle of nowhere, just as they are ready to go their separate ways, he tells her that he is the ghostwriter for a famous novelist, Judith Ralitzer, whose books (romans de gare, or books that can be read in a station) Huguette likes, and she persuades him not only to drive her to the parents she'd been on her way to visit with her fiancé but also, once there, to pretend to be the fiancé who ditched her.

This takes us some way into the movie's story. But this being Lelouch, the narrative is, depending on where the film goes next (seemingly seamlessly, by the way), a flashback or maybe a flash-forward. The film actually began in a studio, where author Ralitzer (a radiant Fanny Ardant) is on a TV interview show with two other writers; later (?) she is interrogated by the police, who are investigating the disappearance of the man she calls her secretary. As if things weren't already complicated enough, the husband of the so-called ghostwriter's sister disappears, leaving the befuddled, patently innocent woman to be interviewed by the chief of police (with whom she begins an affair!) about the missing men in her life.

With all these intriguing convolutions, what I treasure most about the movie are individual scenes and lines of dialogue that connect the script's levels even as they suggest damnably limitless possibilities and that remind the viewer, constantly but subtly, that "it's only a movie." (Lelouch has even been known to pull his cameras back from a car chase to reveal the primitive-looking mechanical means by which the passengers are being recklessly propelled and tossed about.) Introduced to Huguette's family at the farm where her parents and brother live, pretend-fiancé Pierre, expected to want to make a good impression, borrows the sports section of the paper and, yelling "I hate sports!", tears it to pieces and then produces the pages intact, reminding us again that he may be the hunted serial killer. Upstairs that night, Pierre shows no interest in the grateful, sexy Huguette, leaving her to moan and exercise the bedsprings just to reassure her mother (the opposite tack of about 97% of the non-French among us who may have once found ourselves in a similar situation). The film's final scene — not counting a post-credit sequence I suggest you stick around for even though it's not essential — is a reunion (in a station, of course) where the face of the man, lurking behind, seems to merge with the woman's face in what I like to think of as an homage to Bergman's Persona. By the way, there's another multileveled French mystery/thriller now playing, Tell No One, that impresses with its gritty realism and immediacy; but I emerged from it tense and exhausted. Despite its tendency to risk self-consciousness in the service of art, artifice, and artistry, I found Roman de gare satisfying and exhilarating, and I craved more, especially of the same.

Martin Mitchell, former editor of Rattapallax (2001-06) and of Pivot (1983-98), reviewed films for several publications, including  After Dark for the length of its existence (1968-81). He is a contributing editor of the magazine.