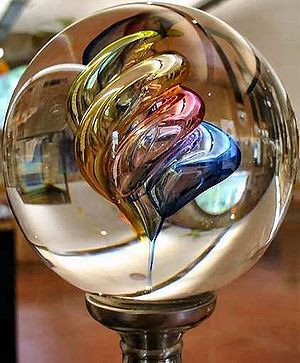 Glass Ball
made by Tyler Hopkins

A Last Go at Pleasure

My mother takes the world into her mouth,
she takes the sour-cream coffee cake and
the rugelach with walnuts and currants.
She wants a pecan raisin loaf, two loaves,
See's suckers, and almond mandel bread,
and I'll take her hunger any way I can,
mainlining my mother's desires, finding
in her appetites the young woman—
tortoise-shell sunglasses and dark hair
pulled back in a silk scarf—
who gunned the white Ford Galaxy hardtop
convertible, a ringer for Jackie O.
This is her reward for years
of tuning deprivation
like a violin, of learning to do more on less
and less until she lived on argument,
withdrawal, dry toast and black coffee, the fish
dish halved. Now that medical studies show
the skinny live longer, she's gained
the sweet taste of being right all along.
Go ahead, try the ginger scones, there's time
for the lemon poppy-seed cake; all the hours
you hoarded have turned into years.
Eat, Ma, you've banked your losses
and now's the time to cash out.

I leaned on her long-distance, on the phone,
listened to her admonitions, understood
that what she wanted for me—independence—
smoldered like cinders inside her.
She wears an aqua pantsuit in the photo,
lipstick, earrings, gold bracelet, stylish watch.
She's eighty-five, I'm fifty-five, leaning
into her, longing to feel her thin frame
against my breast. She sharpened elbows, knees,
collarbone, wrists to brittle points. They matched
her whittled arguments: spare, directive.
"Do what they ask," she would advise. "Don't make waves."
I made waves, Mom, but I made a living, too.

Listening to Bach on Rte. 89

for Maxine and Victor Kumin

In a humidity of Baroque proportions
I compose the faces of my friends;
the interweaving themes of our lives

"Stuffed, they make a fine ornament"

from The Heron, by Giorgio Bassani

Injured, the enormous bird started
towards him, where he hid in the blind,
near the wooden decoys that appeared to feed…

The bird dragged his damaged wing through salt slew,
coming so close Edgardo saw the hole
where the shot entered, and the man imagined

taking the heron in his arms, stroking the blue
feathers as the neck relaxed, looped,
and the great mandible rested on his forearm.

Cradling the forlorn breast, he comforted
himself, a king in desire's wilderness
with his useless plume and crown.

We spotted Great Blues nesting above the pond
the day we cycled through East Marion.

After our three-month separation—
your affair, my remorse—reparations

You said She isn't half the person you are,
and I thought that having come this far,

we'd find our way, despite the hurts, the doubts.
That night, you unbuttoned your shirt,

arched over me and rose, my little heron,
eyes closed, no words, in a world of your own

making. Love, were you already leaving
with half a person, while I slept, disbelieving?

Because he could not speak to her

throughout their marriage, he could not

speak to her as she lay dying. When

the hospice nurse nodded and said

it's time, we clung to the bedrails

and my father cried, Anne!

Where did you put the safe deposit key?


Robin Becker's most recent collection, Domain of Perfect Affection (2006), appears in the Pitt Poetry Series. Liberal Arts Research Professor of English at Penn State, she has received fellowships from the Bunting Institute at Harvard, the Massachusetts Cultural Council, and the National Endowment for the Arts. She serves as poetry editor for the Women's Review of Books and writes "Field Notes," a column on the contemporary poetry scene.

The Fringe on the Epaulet

The general draws his sword and tells his men
to take the hill. "Which hill?" they ask, and then,
"And what do you mean by 'take'?" (The concept
of acquiring real estate while employed
by the government seems beyond them.)

Such are the petty worries of command.
The general reviews his tactics manuals
before concluding that he can't decide
to call this mutiny or confusion
of a most annoying sort. He coughs,

hoping to attract his adjutant, who yawns
and re-examines the classified ads
for stationery and clerical support.
It was different when the flags were bolder,
the reporters duller—when enemies

held no hills but enjoyed the weekly war
as a kind of wholesome sport. That time passed
like a coupon's expiration date, leaving
a more expensive pizza and a fight
worth something less than one night's fix of news.

Not Too Late to Plan

A turkey vulture cruised down Sixty-Six,
meandering from the Potomac west
over land of rich potential. I watched,
admiring the relative ease with which
it soared above my jogging. Then I tripped,
and made easy enough prey for lapdogs,
though the scavenger seemed content to wait
till I matured to the state of road kill.

Fair enough, I thought, turning on Fifteenth.
None of us know the time until we do,
then sky-burial's cheaper than cremation.
Look up someday and claim to disagree:
nothing can out-dignify these shadows
slowly circling the work they need to do.

She gave her pugs names like Death Boy and Skull
and tattooed a mink above her right breast.
We talked all night about primitive art,
the best that we could do. On the weekends,
we'd hike in January, ice-skate in July,
and always laugh at other diners when
doing that Thai place on Lee. We grew old
in a uniquely dissolute fashion,
or maybe just got uglier than we thought.
When we died nothing changed, except for us
and a later generation of dogs,
tattoo artists, and wannabe aesthetes.
It's exactly the way God brewed the world,
just rich enough without a touch of cream.

Skill counts, but also the ability
to position oneself high on the trough
and sup a bit before the little people
wake from their morning stupor to survey

the empty bottle and the unwashed glass,
the envelopes from utilities and
public officials. The morning TV
narrates the greater horrors of the day,

compared to which one's own seem even smaller
and that much greater the shame of being crushed.
My higher power lies within myself.
My trust in God is only conditional.

We each find the way to where we each end,
where power seems less relevant than the wind
that scatters leaves and seeds like stray advice
or bones that take the shape of loaded dice.

The Creature Who Lives in My Roof

Blackie the squirrel, who lives in the eaves,
is a nursing mother, which means that we've
got to take care of the damage soon, or
her kits will worsen what we've ignored.
But how long do we have here anyway,
before we see our final moving day?
The house is already a tear-down, so
why make the squirrels be the first to go?
That may be right or wrong; it's a crisis
that defies cost-benefit analysis.
It's not Blackie, but the generation
to come who'll speed the deterioration
of our house just as our bodies give in
(they race to be the first we can't live in).
Both the squirrels and we must someday leave.
Few may rejoice, but fewer still will grieve.


M. A. Schaffner is a retired federal bureaucrat, living in Arlington, Virginia, with poetry recently published or forthcoming in Dalhousie Review, Illuminations, Magma (U.K.), Poetry Ireland Review, and Stand (U.K.). Other work includes the collection The Good Opinion of Squirrels (Word Works, 1997) and the novel War Boys (Welcome Rain, 2002). In his spare time he serves as a soldier in the Union Army.