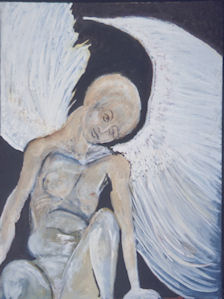 The first time love felt like coming back to life it was spring after a hard
blizzard. Love had been maimed, rocking herself in a closet to somehow
bring back the girl who was. Halved raw, wet feathers again lopped in
brine and currant jelly, a second birth, as if waiting for teeth to break from
her gums, sounds not yet become words or thought scoured from a bramble
of sentences. From all fours love climbed back to two feet. Enrolled at a
prairie college stretching to the Dakotas Wounded Knee Blue Lake New
Ulm Redwood Falls. The brick had barely lifted its lips from the teats, new
among ramshackle farmhouses that stood down long breathing lanes. Here
the ruddy red stone dormitories were domed by smoke Plexiglas and
piloted by androids. Examining by moonlight the snow with its throat cut,
nothing in those bodies and buildings could teach love how to live. Like
farm boys around girls who shuffled their feet, although they'd helped birth
piglets and seen afterbirth flower from the humid womb of sows. Sky
mounted the plains, an ink-blue wilderness of barbed wire trying to pluck
its thorns from the wind. Eighteen, her arm in a sling, metal fused to bone,
none of it mattering to love who was coming back into this girl. She glowed
with a beautiful wounded sheen. Hair straight to her waist, frail in a blue
cape, a brokenness trying to pretend that love was/is and could yet be
again.

Dawn breaks on Lake Street, the suicide of moon on the block of wrecked
Minneapolis mansions. Ice congeals the cast iron of street. Fifty miles
south, trapped into five-month winter, her hometown Redwing grovels
under snow, barns and farmhouses stagger, mastodons, streaming filthy
fleece. Enough for a week's rent; the chasm in their ceiling makes space for
another room to fit between her and the chandelier of flame-shaped
blackened bulbs. He grips his red wine. His breath is sticky-sweet—blood
from a sucked cut. "It's finished, I tell you," he bites a thread on the sleeve
of his tuxedo. The eye of his navel gapes. "I want to practice the silence."
Black hair hangs to his waist. Impure, but she can't deny his allure.
Different from the sons of Swedes she grew up with, their blond hair the
color of desks. She loves him. His scorching yeastiness. His hands encircle
her burgundy sheath, hem of boa feathers. Her eyes are chunks of blue ice.
Her mouth a smear. A Chinese princess brought to the Forbidden City with
a half-eaten kiss on her lips. "Get out of here," he whispers in her ear,
"unless you're coming with me." His ancient Underwood shudders—its
ribbon pulled from the spool, keys gummed together. He's burned almost
everything. His unfinished manuscripts, Mon Hysterie, Chorale, —
the reams of famished weeds and belly dancers.

Wading through the soft sea with an eye of iron.
One fragment. Like reading Revelation on the first day of a decade. He's a
genius, she thinks. The next Rimbaud. His excess fills her larynx, loosens
her heartbeat. If he wants her bones, she'll gladly give him those.

Down here in the orchard of mud I find a face with eyes like buckeyes. Is it
the pony I lost so long ago? His muzzle is velvet mire, his mane, chestnut. I
am trying to gather my mud next to his flank. What can I trade to have my
hand for an instant? To raise a wave. To pat. My hair the birds took to nest.
The red mulberry has uses for me.

You are the time beside the mailbox when the ditch begins to creep and
slide into the corrugated pipe—degrees stagnant under the quilt of the road.
You plain and foursquare are the dinner bell ringing, thudding past oak
trees, the sweaty cattails afloat in civet bones. You dense as midday dinner
the threshers devoured sixty years ago in Black Hawk County, command
the locust to drone calling their women to nest. Singing to the girl who lies
in her girl grave, you eye shadow her, bruise her, make her a glitter of green
cow spot. You smear her with your elaborate erection, purple folds. You are
that tar brush and claw opening her neck, for blood to flow from her mouth
to her feet, jaguar with penis, jaws licky red with liver and heart, the bread
meats eaten. You offer her to the gravely sky.

Tease, he smiled. His nose began to run and he pulled a handkerchief from
his pocket. She'd never before seen a handkerchief in real life. He escorted
her to the refrigerator and picked from the lunch meat pack a slice of spiced
ham. Poor people food. His housekeeper's. He liked to watch girls eat. She
spooned mayo from the jar to her mouth but she wasn't at all hungry. She
hated to leave the avocado appliance. Air hung religiously around the ice
maker. He pinched her bottom. Goodness what a morsel you are. The
asinine bubbliness was in her head along with foam from the corner of the
old accountant's mouth. Hint of cooked asparagus. She moved lazily over
piled carpets into his study. He showed her his left mannequin leg that he
lifted gingerly onto a footstool. It did not match the pale right one
threaded with the occasional hair. He'd been run over in his driveway by his
ex-wife. "Instead of braking, she hit the gas. I don't believe it and neither do
my lawyers." Her eyes were riveted. She would sleep in that remarkable
woman's bed. The day, what she could make of it behind purple drapes and
Venetian blinds seemed perfectly still, an adverb afternoon.

Nut berries hang from barren branches. Farther up the cliff trees are
fruited with petrified oranges. They attract her although the fruit is dead. A
dying so dry so different from the riverbank's sour teeming. She picks an
orange, inhaling. Dehydrated. Yet it has the odor of sex, milk-flesh slit. She
offers him their odor, love on a mattress between rocks, what can't be
washed. He tells her he knows where skin comes from. Sap that dries
between her thighs. Minnows whirl, leech up the hill. Stones tumble from
earth socket to murder the particles of follicle and tendon trying to carry
his slouch into her womb.

Moon passes under a bread wrapper cloud and goes out. Bowery graveyard. The
dawn is a window grate fire escape, a blurred curtain. Dawn noses the pale stones
sunk into dirt. What once was cow lane now skyscraper-siren and a derelict's
whiff of rotting peach breath. Here the fleshed undead sleep bundled in pages of
flophouse Gideon Bibles, here the living are filled with thirst that gnaws at their
bowels. Wind shakes the hackberry, furrowed green dryads wedding Hudson to
East River. No sky here, only blinking satellites and mica-flecked twin phantoms.
The sweetish smell of burning hair.

Drifting in overcast, water and sky where men sit all day and fish. Cranes perch
in the mist that goes on and on. It's still except for the mullets that blurt from the
water like they're being shocked, without scale, rouged creamy skin like the high
inside of a girl's thigh. Mullets. Men. Flat heads, eyes oil-black, disturbing, pre-
Christian. The men are using minnows to fish with. How many eons to make
one? They're living in the pail, silver ringlets, and some blue, some pink, will-o-
wisps. Men bait their lines and cast. The minnow swims away from the boat with
the hook. It has to be alive for the fish to bite. Sun has fallen into the bayou and
mullets jump, flying from the water, ten, twenty feet, trembling with the murk of
the underwater.

You flick the switch. I jump; I swallow the hook deep.

Mustang Island. Her lover and she ride the elevator to Sunday brunch.
The black slug of an oil barge sits on the horizon as people crowd in,
brightly dressed. Today he forces her to feast. She is fingering the slices
of ham carved from the hock, licking cantaloupe balls, honeydew and
pineapple wedges. What an animal you are, he says, his fork edging into
her Eggs Benedict. She wishes she were down on her hands and knees,
nosing the starvation grasses that hold the dunes in place. He forces her
to eat more chocolate crepe. In another life she galloped this island,
wind yanking her hair, wild woman kept with horses. Her men captured
other men. It was forbidden to cut the sexes so urine did not poison the
white meat. All that before the Conquest.

Stephanie Dickinson was raised in rural Iowa and now lives in New York City. Her poetry and fiction appear in Cream City Review, Green Mountains Review, Chelsea, Nimrod, Iron Horse Review, Inkwell, Ontario Review, Water Stone, Columbia Journal, McGuffin, among others. Along with Rob Cook, she publishes and edits the literary journal Skidrow Penthouse. Her Half Girl won the Hackney Award (Birmingham-Southern) and is published by Spuyten Duyvil. Her story "A Lynching in Stereoscope" appears in Best American 2005 Nonrequired Reading edited by Dave Eggers. "Dalloway & Lucky Seven" and "Love City" are reprinted in New Stories From the South, The Year's Best 2008 and 2009. She recently finished a novel of Katrina entitled Memory & Bluejay.