Having seen Roman de gare three times, I should be something of an expert on this movie, but I just can't wait to see it again. The only thing regrettable about additional viewings is that the countless surprises get diluted; but these are a function of the film's many levels, which remain a challenge and a delight even after you've learned what they are going to contain.  Read Review

There is a garden at the center of many of the poems throughout Lorna Blake's resplendent new collection of poems, Permanent Address, providing a symbolic organization for the entire volume of poems. Before one finishes the collection, the place or situation of every poem—each new address Blake's narrator/protagonist examines—will resemble a kind of garden, having, of course, an actual location, as well.   Read Review 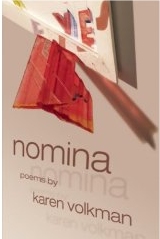 In her most recent volume of poems, Nomina, Karen Volkman pairs formalism with unwilling brides, "the wind's white hair," and the movements of stars, setting the stage for an astute meditation on the idea of chance. Written as a book-length series of sonnets, Nomina invokes astral imagery when describing the intersection of love and fate, using form to echo this delineated "sky we bear on our shoulders." In doing so, Volkman's poems present the traditions of Dante and Dickinson alongside their possibilities for twenty-first century poetry, a combination that "blazes" and "radiates" throughout.   Read Review

I Stand on Holy Ground: Larissa Shmailo's A Cure for Suicide

A Cure for Suicide
by Larissa Shmailo

A wild garden cultivated with a cold eye and warm heart grows between the pages of Larissa Shmailo's latest chapbook of poetry, A Cure for Suicide. In language alternatively brutal and compassionate, in-your-face and ethereal, she expresses passions so primal and attitudes so uncompromising—with images of gods and demons, shamans and serpents, martyrs and murderers, ideas and extreme states of mind brought to the brink of self-undoing or annihilation—it's as though only in all-or-nothing / life-and-death ultimatums does real worth, or the power to redeem, the cure for suicide (or at least its prevention) become viable. In "New Life 1-3 (Magpie Translations from Joseph Brodsky)," the reader is invited to Imagine the more honest the voice, the less it has tears, / love for whatever there might be, passion, fear. Though the poem is the book's last, it might serve as both introduction to and summation of its themes. A Cure for Suicide journeys into realms swirling with forces of nature, mysticism and magic, vortices of all-consuming love, and encounters with death. In these poems the self melds with and transforms / is transformed by the other, then lays out what's blatantly, acutely real, bringing it back to an objective self-awareness that has moved beyond pain and separateness into a bold acceptance of the awesome power of one's individuality, and the imperative to honor and embrace it, less tears. Shmailo's poetry digs deep and reaches far, but not without humor, wit, and charm.  Read Review 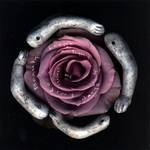 In Brant Lyon's compilation of musically-infused poems, Beauty Keeps Laying Its Sharp Knife Against Me, home is as ephemeral as the beauty of a rose. In fact, the rose featured on the cover of the CD, encircled by doll arms, appears worn from the searching of so many nomads, the weight of so much blood and honey, sweat and rain.  Read Review