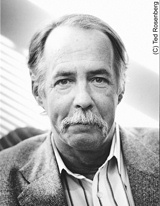 After my first poetry workshop with William Matthews back in February 1997 at City College, I remember feeling that my decision to change careers and go back to graduate school had been a good one. In that first class, I realized that Bill Matthews had a certain kind of grace that had basically been nonexistent in my former line of work as a fashion designer. I also had the good fortune to meet other student poets who were kind and supportive as was Bill. I always found it surprising that I would find a person such as him with good manners, class and intellectual prowess up in Harlem, teaching at the affordable City University of New York.  Read Article


Shirts of Flame: Poetry in the Space Age
by Robert Klein Engler

When I was young I longed for the life of a poet. I imagined it to be an ideal life lived in rooms by the sea, filled with art treasures and muted sunlight, a life of peace and harmony and cello music. My real life was a childhood lived across from a coal yard. It grew to become a life of political strife, wars, unrequited love and drab urban streets. My life became like the life of many men, today. A poet's life can be lived anywhere.  Read Article