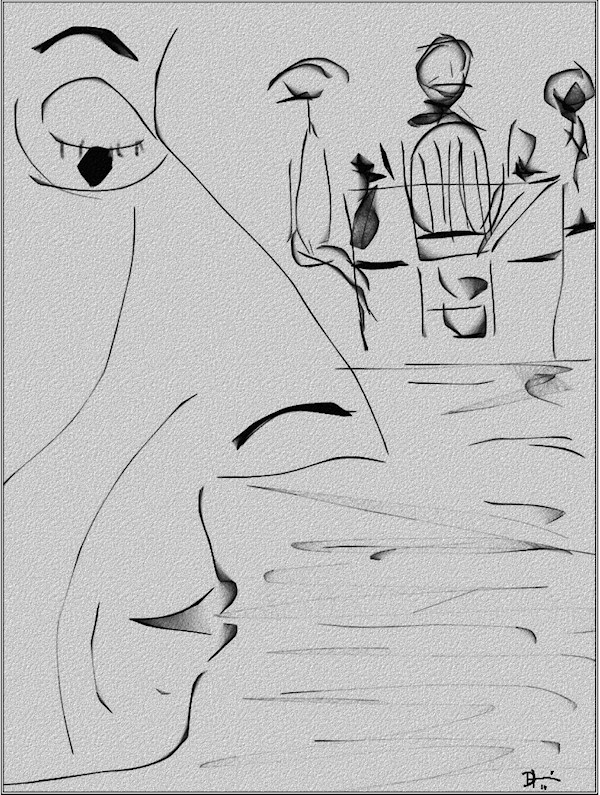 We do this: We go out for coffee in Wayzata. We go to the Caribou that is next to the bookstore. Harry, an early retiree and investment strategist and good man, world traveler, stops at our table to ask if we have seen it: the Porsche Carerra parked just around the corner. He estimates it costs $350,000 and that there are fewer than ten of them in the country, six more likely. We haven't seen it, but Lena, my friend, says, "That's how much my house costs: $350,000."

Later, we're eating hamburgers at the Wayzata Legion—they are very juicy and cost $6 for the basket—and Lucia walks in with Karen. Karen is carrying a gigantic gold Chanel purse. Both are in pants sets and heels. They have been to Gianni's, the best steak house, and are coming in to the Legion, the only place that allows smoking inside. Lucia is loud and friendly and affectionate. She runs her arms around the Duke and squeezes herself in between his legs. He is bald and yellowing and spotted, at least 70, and she is 65, but she looks ageless, like Sophia Loren. Karen ties us up with talk. She tells us her father is a three-time veteran, and people at the Legion are always good to her even though she wears Chanel and Cartier diamonds. We look at her finger. It's big, a wide band up to the first joint. She wears a diamond cross that covers her breastbone. I can't figure out why she is wearing a leopard print chemise. She is very married, as she tells us in plain detail. She says that she and Lucia are going to a private dinner with Bush in Wayzata for $5,000 per person. Lena says she would only pay $5,000 to eat with Elvis, and only if she got to sit right next to him.

Karen walks away and Lena says that she has Cartier, too, and Chanel, but she doesn't talk about it with strangers at the friggin' Legion, for crisesake. Of course, I say. Lucia is German, and we had a conversation auf Deutsch at the coffee shop on another day. She said my German was commendable, but she knew right off she didn't like me. That was the week before she went to the Cheney luncheon in Excelsior.

Lena and I grew up together and vote for Democrats. We've talked about politics, which is a little surprising considering that so few people do. The men in her family are Republicans and the women are Democrats, going back to FDR. Their women and men disagree about the war. In my family, we vote for Democrats, without ever being sure whether they represent our views. My mother is more like a moderate peacetime Republican, my brother a Christian member of a leftist party not invented yet.

At our women's dinner, no one takes pictures. All seven women are dressed up and look beautiful for our age. Our ages vary from 41 to 66, adjusting for the possibility that one of us is altering her statistics. We grew up together, most of us. Our goal is to eat a terrific meal in a restaurant and to light up cigarettes afterward. Soon, we won't be able to do that, and already, we have had to drive to the neighboring county to do that. Our hostess, Lena, visits Florida to see her snowbird parents and believes the smoking ban is our Prohibition. She has been watching old Bogart movies and realizing the end of an era. I wear my Mizrahi evening dress that I got at Target for $6.

The truth is, we hardly ever understand what is going on. If you consider that it is legal to boot-lock my car in a Minneapolis parking lot for $119.75 but not to smoke in a restaurant, are we not in our rights to ask what rights are, what ours are and what they were?

I order, of all things, beef liver. What a strange decision, to eat liver at a restaurant. All the women ask to taste it, as if it were an exotic appetizer. I give them all bites. For liver, it tastes very good, but for food, it tastes like liver. The thought of it, while I eat it, causes a ruckus in my esophagus, and twice I go to the women's room to burp violently near the sink. I eat it in the hope that it will help my liver, which is holding up well after years of taking medications and a past of too much drinking. So, we are all healthy but suffering financially, not equally so, and the tendency to suffer financially has been caused by humbling ourselves to particular men. We take a quiz in moral values, phrased as a party game. After the story-quiz, it comes clear that I place my values in the following order: Security (the old male friend), Love (the girl), Sex (the lover), Morals (the girl's female friend), Money (the old man). Within the group there is every possible combination. I'm keeping this vague because it is more important to get out and enjoy company and a meal once in a while than it is to report it in a detailed format. You see how it makes for paler writing. I do.

Ann Bogle's short stories have appeared in The Quarterly, Fiction International, Gulf Coast, Big Bridge, Black Ice, Mad Hatters' Review, Metazen, Fictionaut, Blip, Wigleaf, and other places. Solzhenitsyn Jukebox, a collection of five stories, was published by Argotist Ebooks in 2010. Country Without a Name, a series of 24 prose poems and stories, including "Gerade rechts zum Volkszimmer," is coming from Argotist in June.