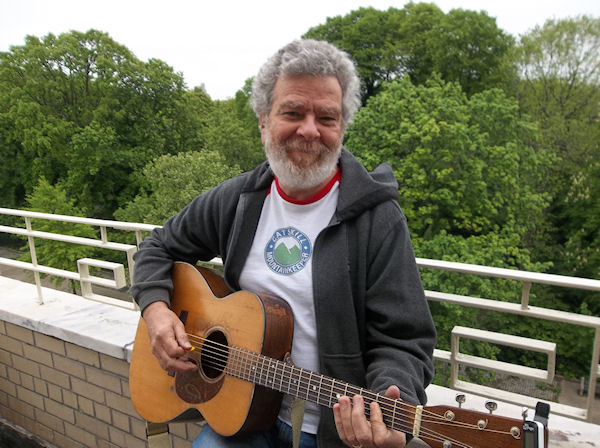 2
Well, he points to a field where I just baled,
says, "That there's the MAR-CELL- US Shale.
"Call it alfalfa around here," says I.
Says, "A mile down between them plates
there's natural gas just a waitin' …
make you rich, and the country free
of oil from the Middle East.     He said that.
Why you'll be hailed for patriotism,
remembered as the man who ended terrorism.
Think of it Pruit. Nothin' to it.

3
Now, I'm healthy and wise and guess I know
how gas passes … and comes and goes.
But he looks up and says to me, "I can explain everything." He said that, too.
'Couple of trucks, 'couple of blasts,
down goes the drill … up comes the gas.
SAFE and simple, EASY and clean.
And don't count sheep if you can't sleep,
count your cash register a-ringin'.
Ca-ching! Ca-ching! Oh, yeah! Ca-ching!
Is that the sound … of a cash register?

4
Well, I signed up and straight away
a million machines come to stay …
noise-makers … hole sinkers …
high pressure water hogs … holy stinkers!     It's true!
Night and day, by and by,
my livestock died and my well run dry.
My wife left and took the kids,
and the Middle East was still full'a terrorists.
Not my fault, I's doin' my part,
They tell me gas 'ill be comin' up here faster'n methane from a cow fart.

6
Well, then one day there come these smells,
and I swore they leaped up outta them wells.
So I called up the company, they said "Hi! How's everything?"
They said that.
So I told my story straight and plain, not being one to complain.
They said, "We're in the gas business, you want the EPA!
Big government, slow as winter molasses … and taxes!
Put in your teeth and wear your glasses.      Don't say we sent you."

7
So I called up and like they said, the EPA give me these here tests:
"Turn on your water, see if it's wet.
Now, stand by the spout and strike a match,
if fire jumps up, why … you jump back."
Water BURNED all the way down that drain.      Hot too.
And when I asked what I oughta they said put a clothespin on your nose
… and don't drink the water!
I wouldn't do that, I said. I don't like hot water.
Would you like some tea bags? they asked.
No, I said, it might start Tea Party. I wouldn't like that neither.

8
Well, the very next day the EPA called to see if I was okay,
a man with a title so long by time he said it the day was half gone. It's true.
He was Chief Executive Scientist of Hydro Engineering and Geology,
and a qualified Arborist, Agronomist, Botanist, Biologist,
Chemist and some gists ain't even exist yet.
Well, I said I got the gist and begun to explain my complaint list.
"Speak up," he said. "I can't hear you over all the drilling,
the pressurized pumping, the hydraulic thumping, why I'm about to run
for cover!
It's rattling my teeth and my coffee … well, I guess you could say
my cup runneth over."
So, I guess he got the gist o'the mess I's in, and I hung up on him.

9
But he called back and said to me, "Son, this a classic case in engineering.
It's called horizontal hydraulic fracturing … of your brain."      He said that.
"And, yes, it's against the law of decency and tact, but you can't go to
court on that.
As the locals'd say: "You've been fracked!"
The company's fracked and poisoned your farm, but they won't admit
they done you harm.
They'll say it was a pre-existing condition."
… why, hoss, as sure as a company is a person … they'll take you to court.
And as sure as money is speech … they'll get a deposition,
says you have a PRE-disposition to entitlement programs and dot-orgs.
They'll say you believe the rich should support the poor,
and that you was planning to shake 'em down ALL along.
And when your farm and family happened to go SO wrong
you saw your chance to victimize them!
That's right. They've said it before and they'll say it again.
They'll say, Yes, … they was on your land … but at your invitation.
They'll say they was there to save you and rescue our great nation.
And the cause of any damage cannot be …
from their extractive mining methodology.
Why it's hyper-sensitive! Hydro-intensive!
And never harmed no one, no where, no how.
They might accuse you of disaster capitalism! Why you could go to prison!
and be ordered to pay their company's taxes!     …
Good thing for you they don't pay taxes.          That is true!

11
Now, I suppose everyone knows the worse terrorists ever known,
are the greedy ones we're growin' right here at home.
Now, just to name a few money-obsessed rogues:
take The Brothers, Koch … Charles and Dave,
and T-t-t-t-t Boone Pickens … Ah, pick it, boy, (guitar riff)
… And all across New York State you can see just how people take
nonviolent direct action … to give us the traction to put and end to frackin'.
And if you think you have a stake in the state of water and air …
just take a look at all the places you can vote your share
just google anti-fracking action.

Preston Hollow was found in a basket, floating down Kaaterskill Creek, in upstate New York. But this is not where his legend begins. In fact, this happened only last week. He was charged FYI (Floating Yet Intoxicated) and released on his own recognizance, though he admitted he hadn't seen a mirror in years.

There's not much depth to Hollow's past. Some say he was born on the bio. By one account, he's an environmental lawyer who never met a tree he didn't like, and has passed the bar to practice in over a dozen states. By other accounts, he's incapable of passing a bar. Several years ago, someone identified him as Preston Hollowman, a charismatic rebbe known for his kleizmer fiddling and philatilism. Hollowman eloped with the shikza chanteuse Rebeaucca Sunnyface, and they were never heard from again, where they worked as public service employees and raised two children.